Normal Editions Workshop was founded in 1976 at Illinois State University. James D. Butler’s vision for this contract print research facility emphasized an educational mission both for the students who would benefit from observation and participation and for visiting artists to experience new techniques and methods of expression through various printmaking media. Butler joined the faculty at Illinois State that same year and, together with printmaking faculty members Harold Boyd and Raymond E. George, established the Workshop which continues to this day. 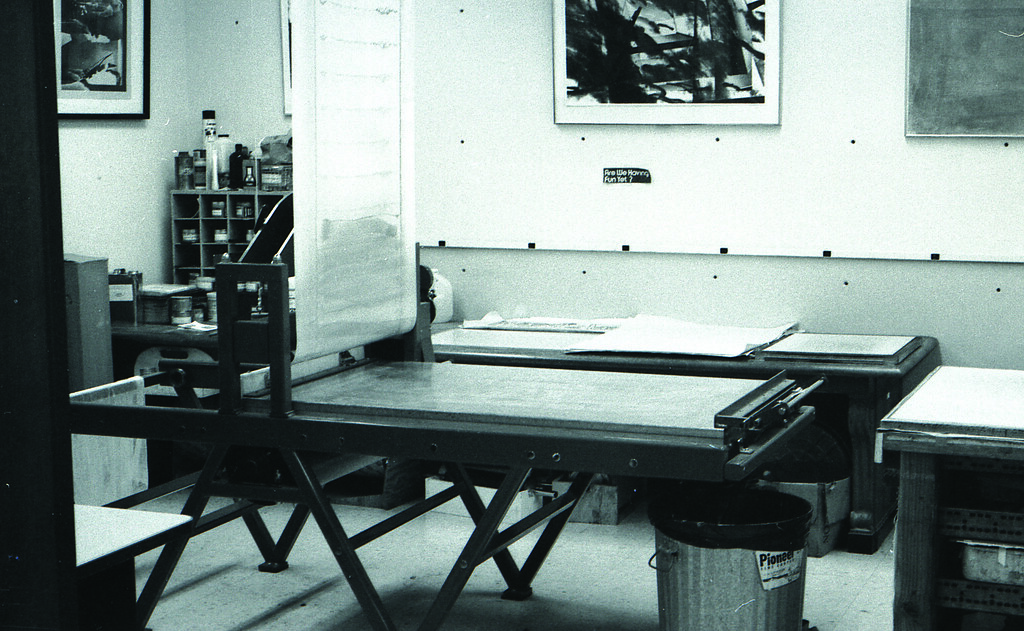 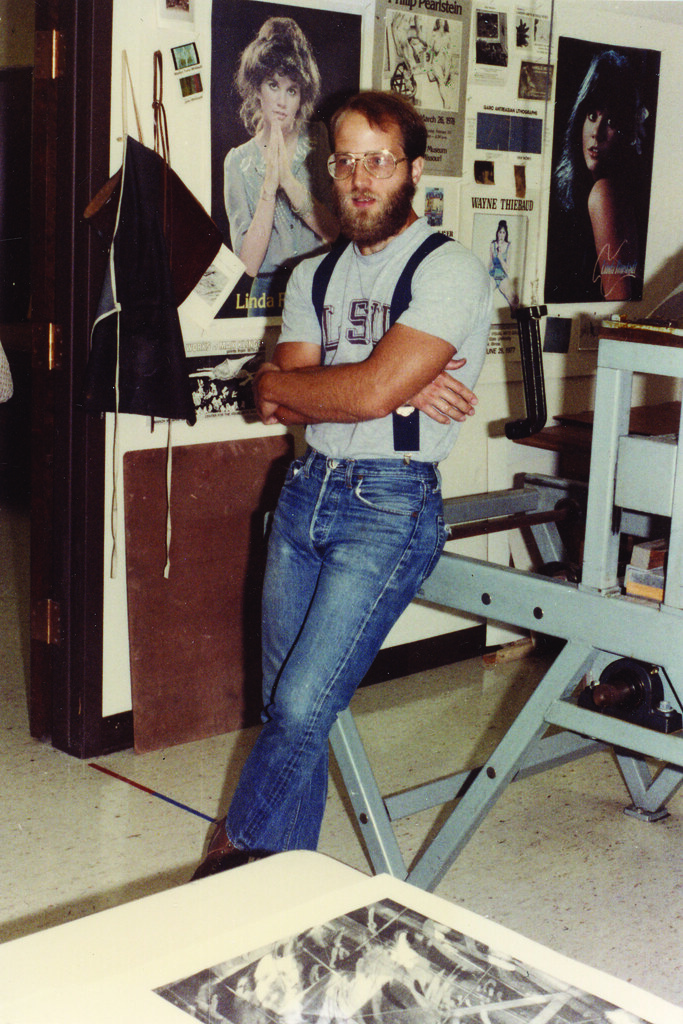 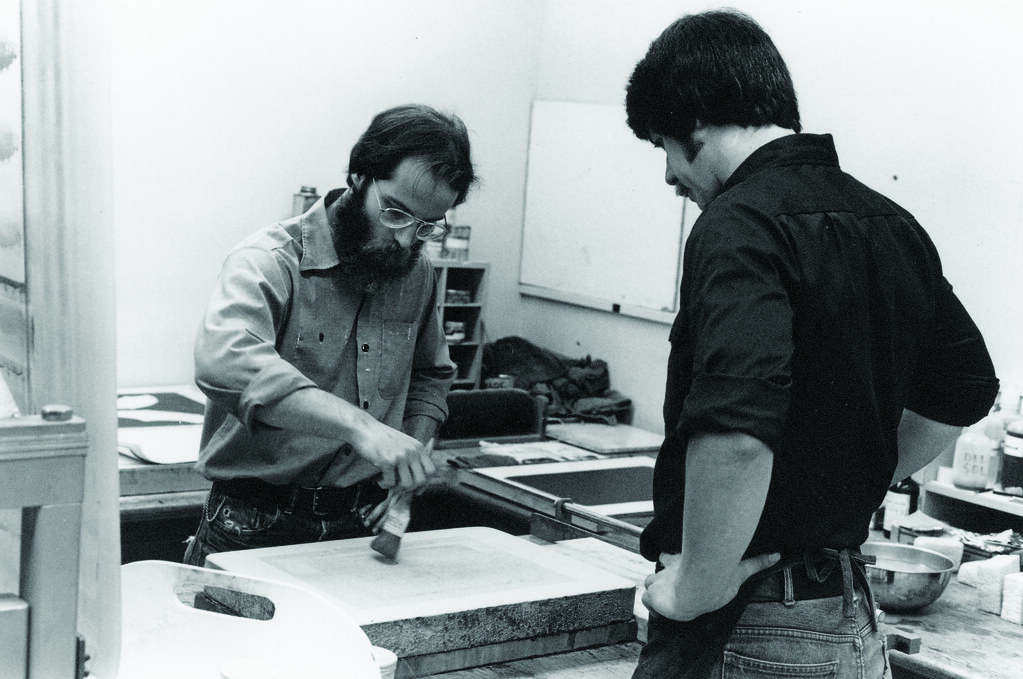 Richard Finch and James D. Butler processing a stone at N.E.W. in 1977 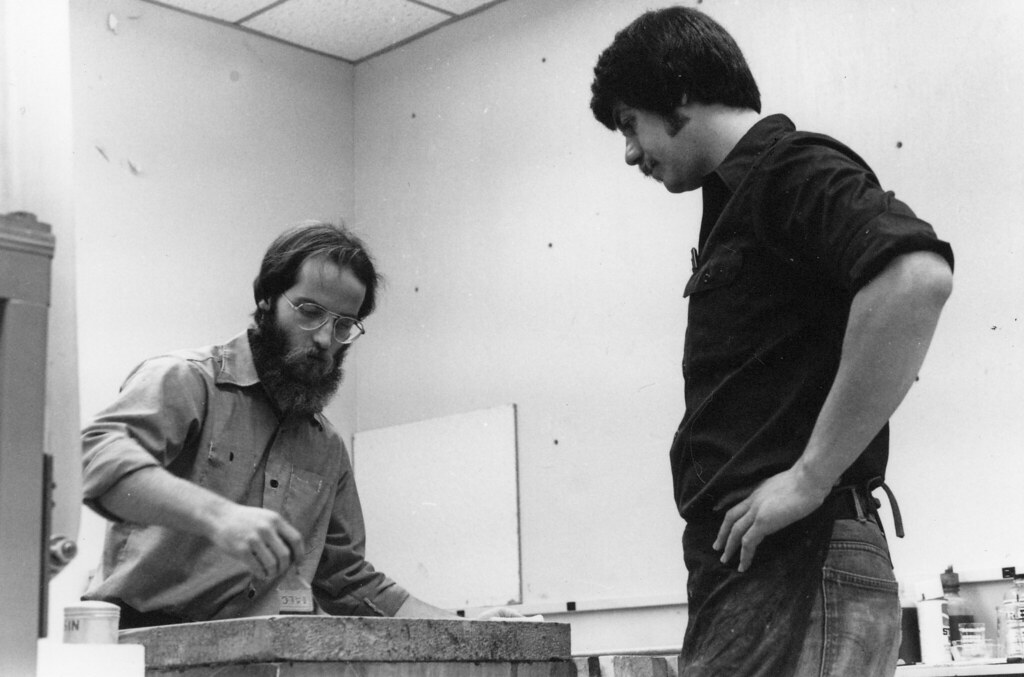 Richard Finch and James D. Butler working on an early project at N.E.W. in 1977 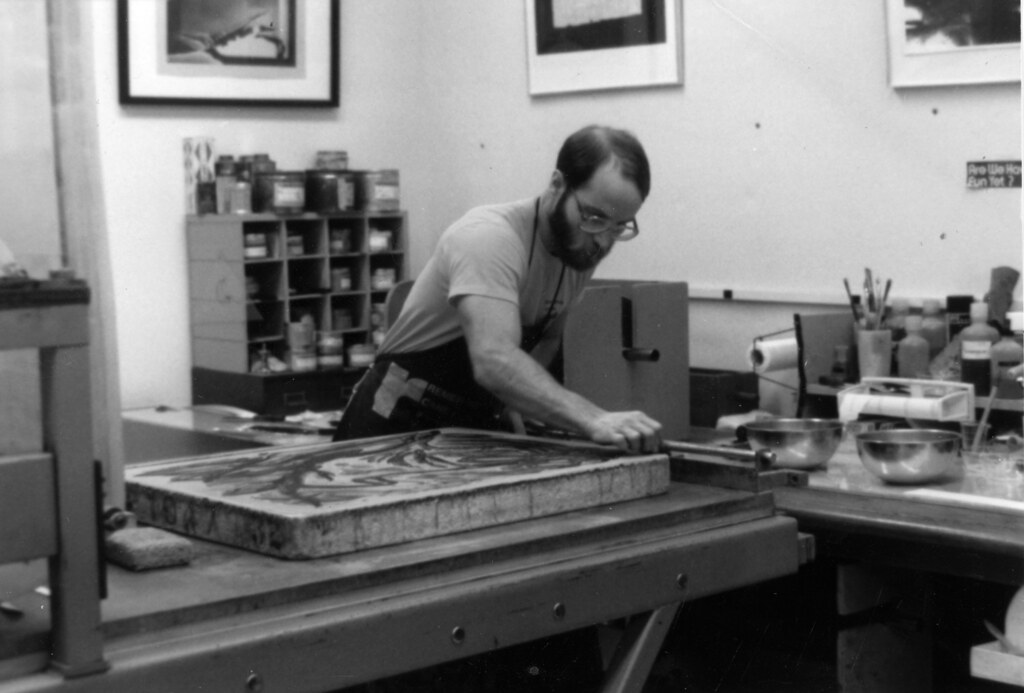 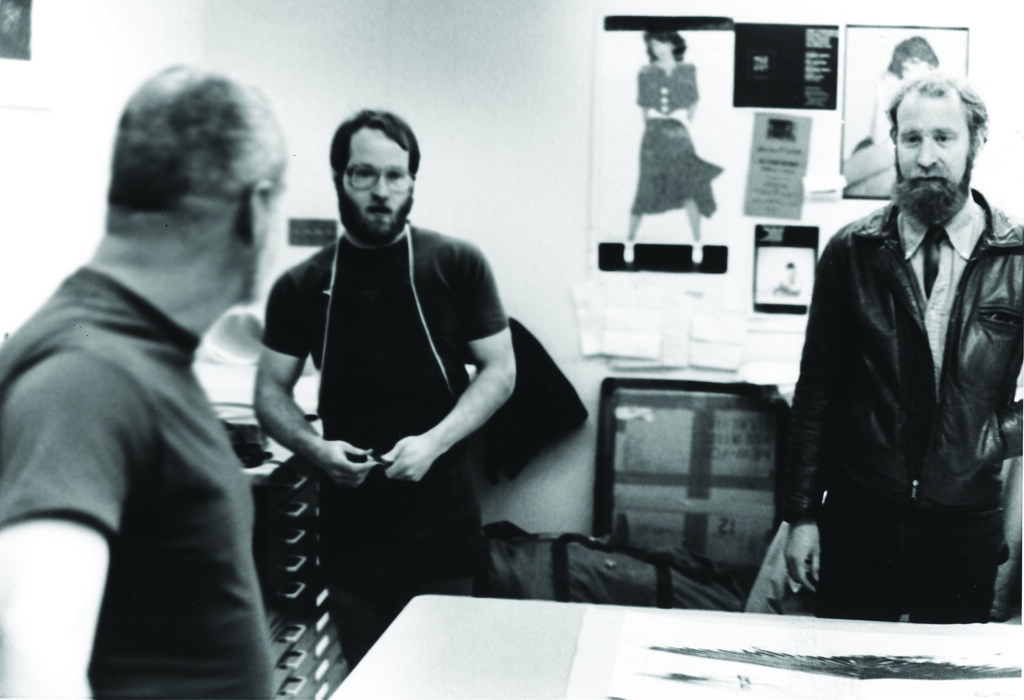 Raymond E. George and Richard Finch discuss the collaborative project with Robert Stackhouse in 1983 (note proof from the "Brooklyn Bridge" edition on the table) 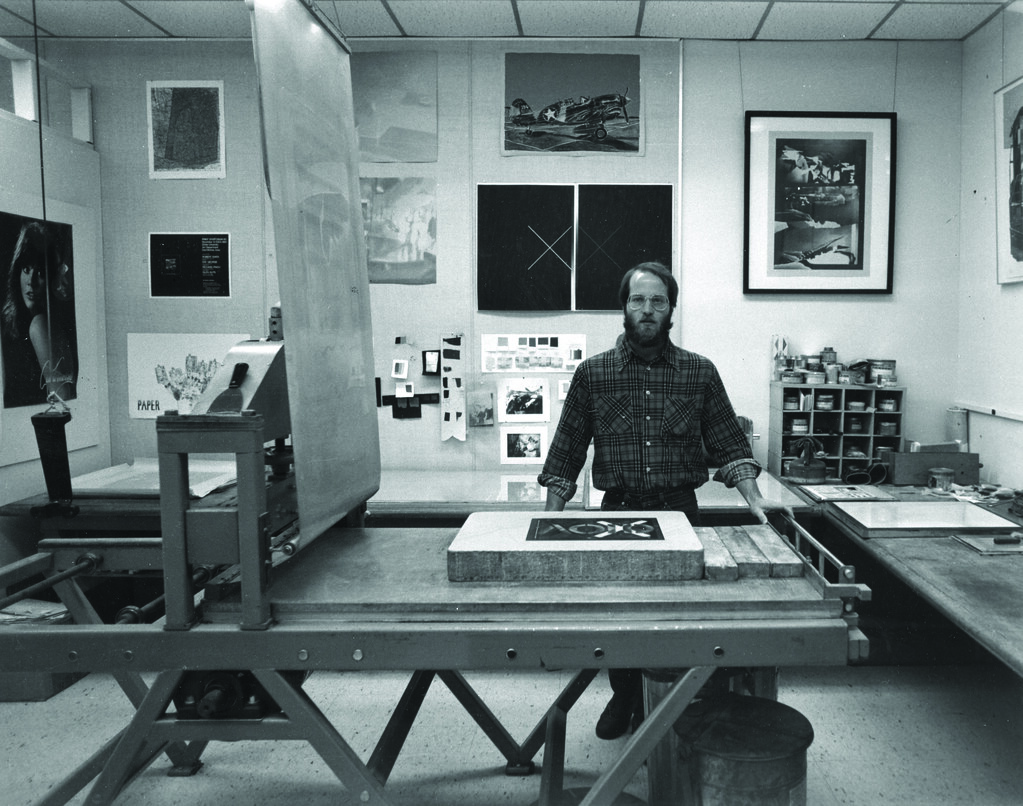 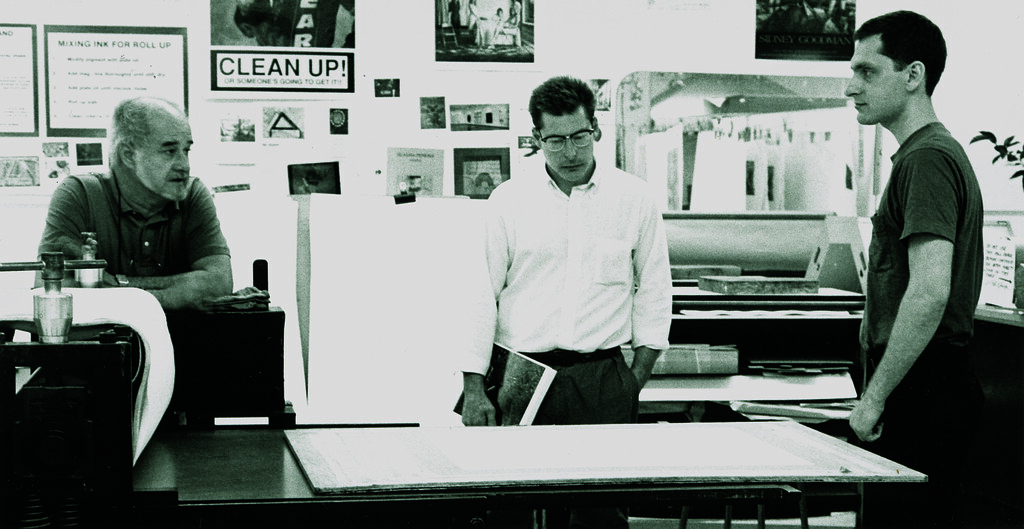 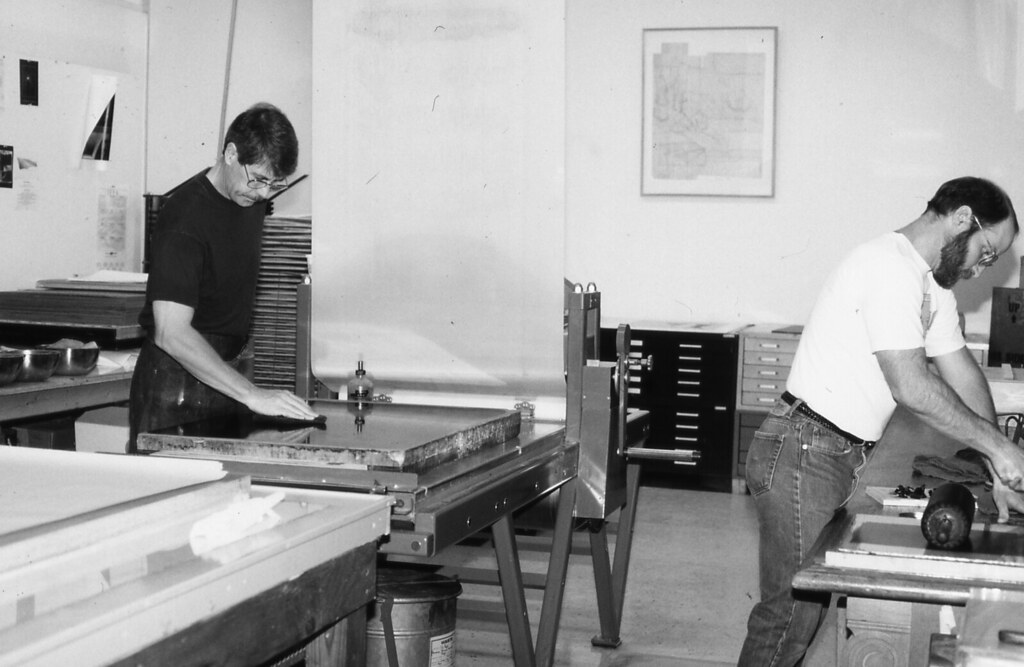 James D. Butler and Richard Finch washing out the stone for Butler's " Still Life with Glass and Clay", 1995 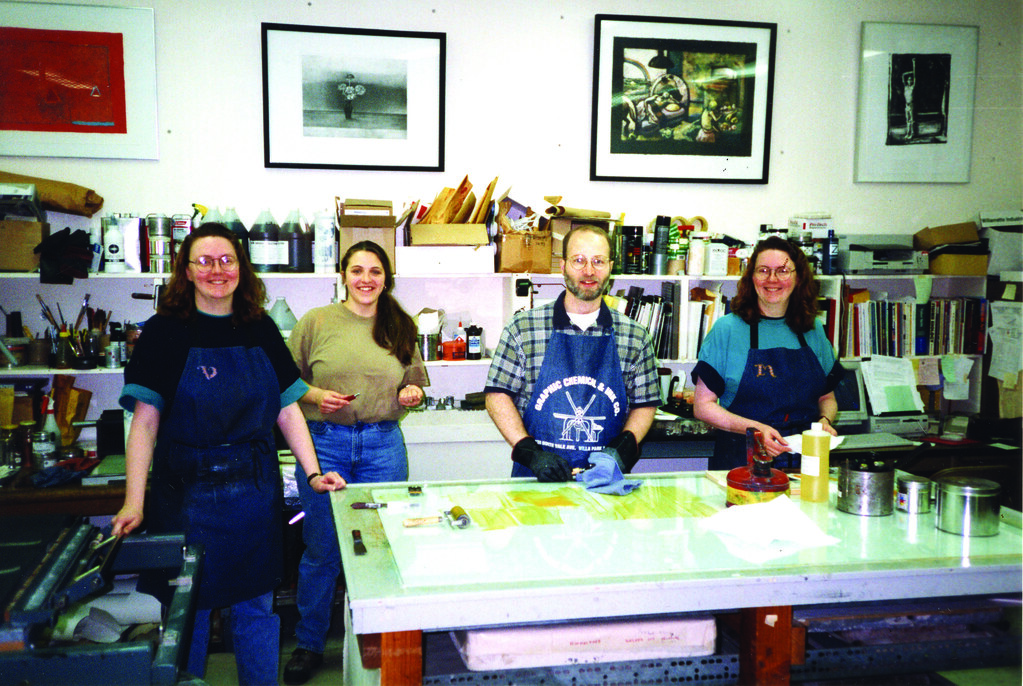 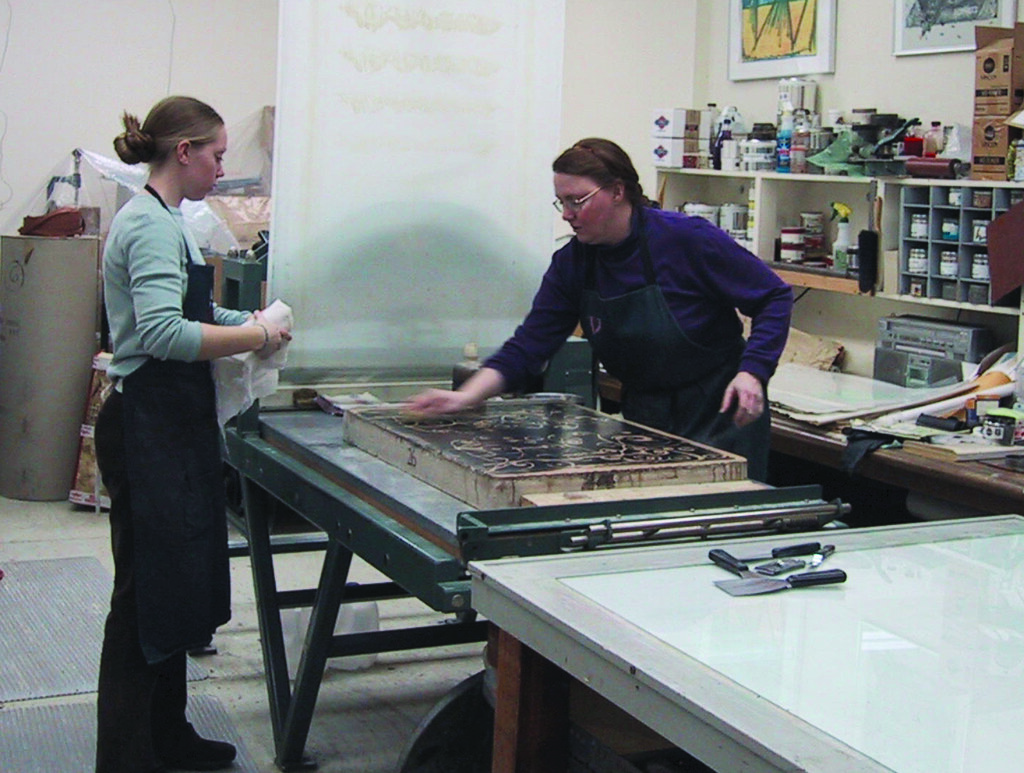 Tonia Bonnell and Veda Rives processing a stone for the Rosalyn Schwartz projects, 2000 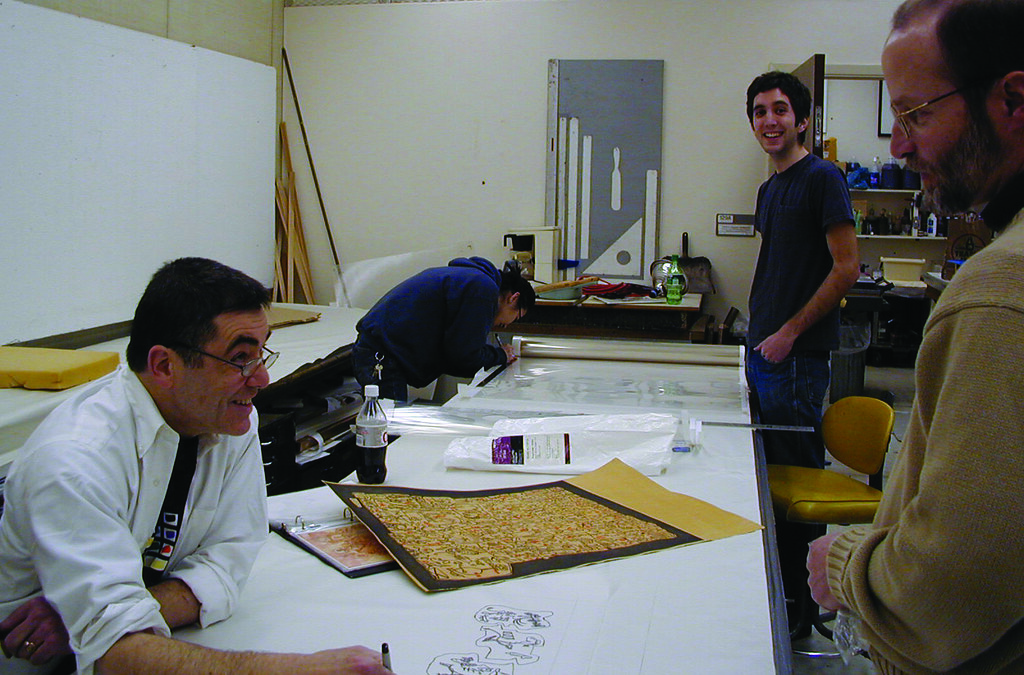 John Himmelfarb and Richard Finch discussing the collaborative project while Yoko Kawazoe and Chris Shepherd work with mylars for the artist, 2003 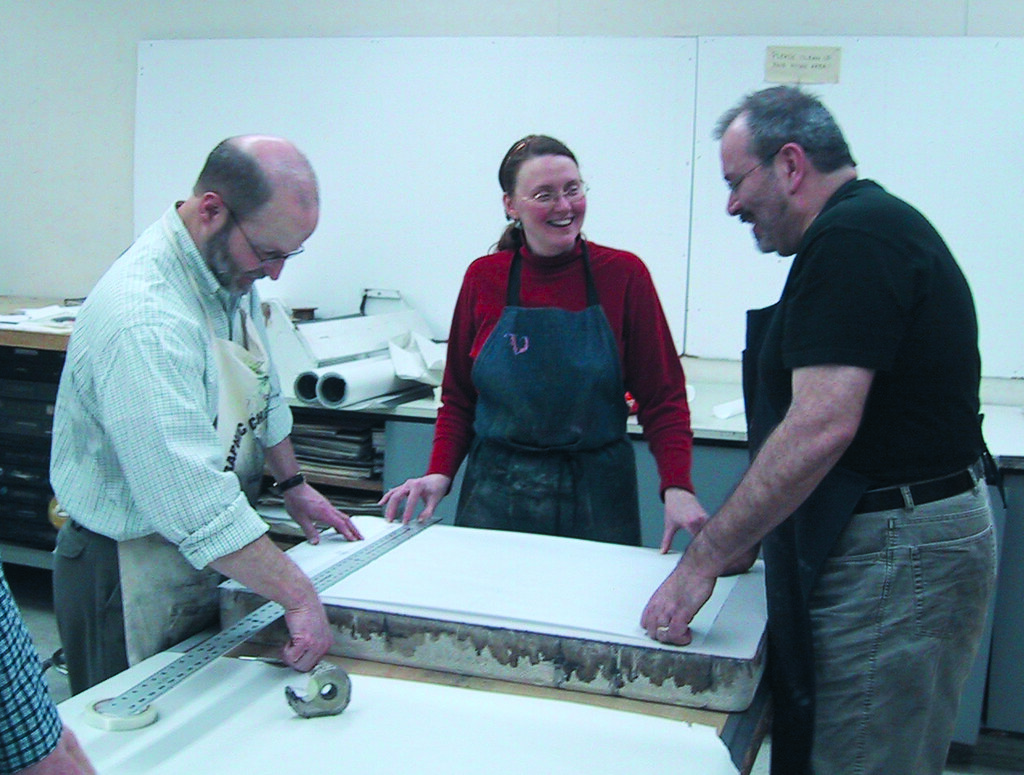 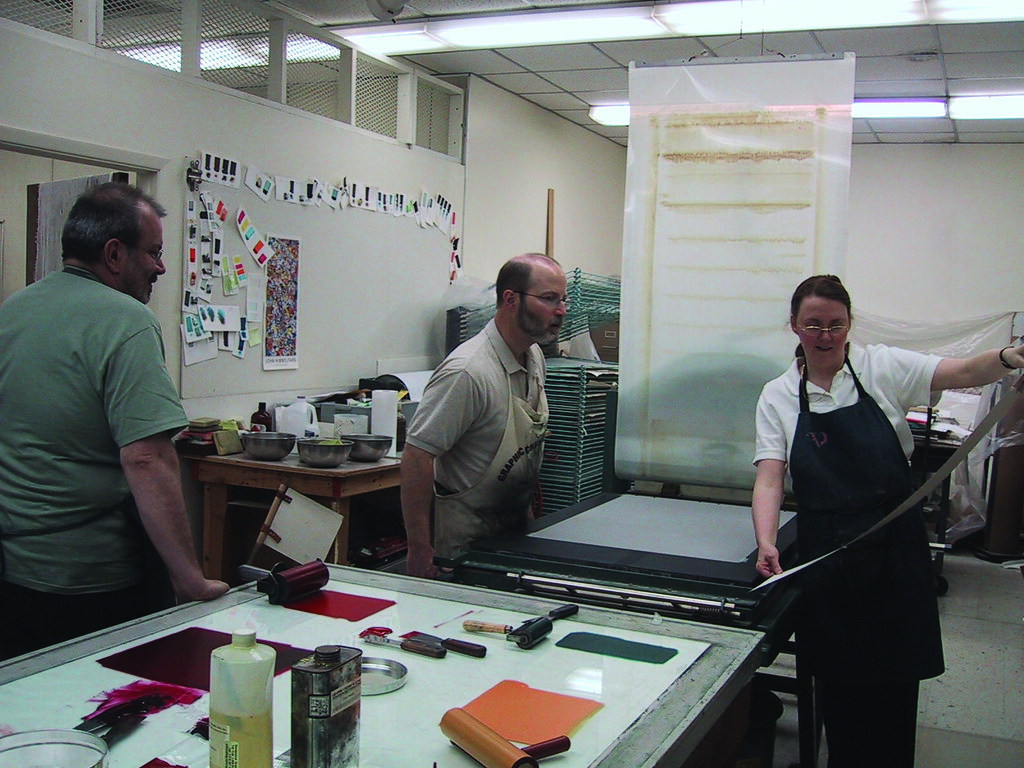 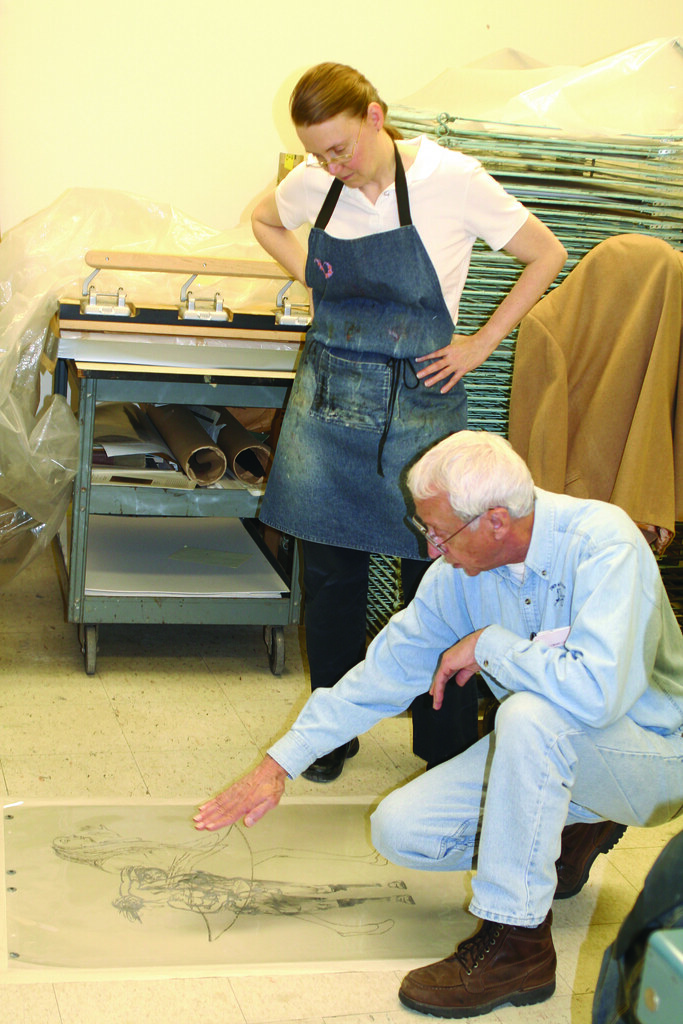 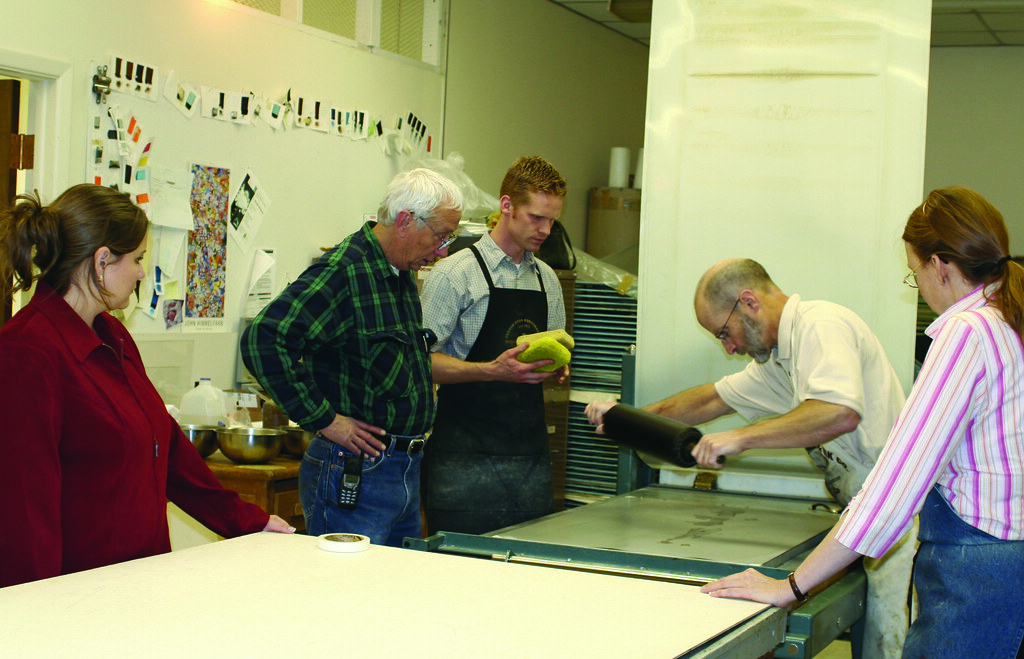 Richard Finch (center with roller) surrounded by assistants and observers: (left to right) Lori Niemtschk, Harold Boyd, Brandon Gunn, and Veda Rives during a color trial proofing session for the edition, "Mother and Child" by Harold Boyd in 2006 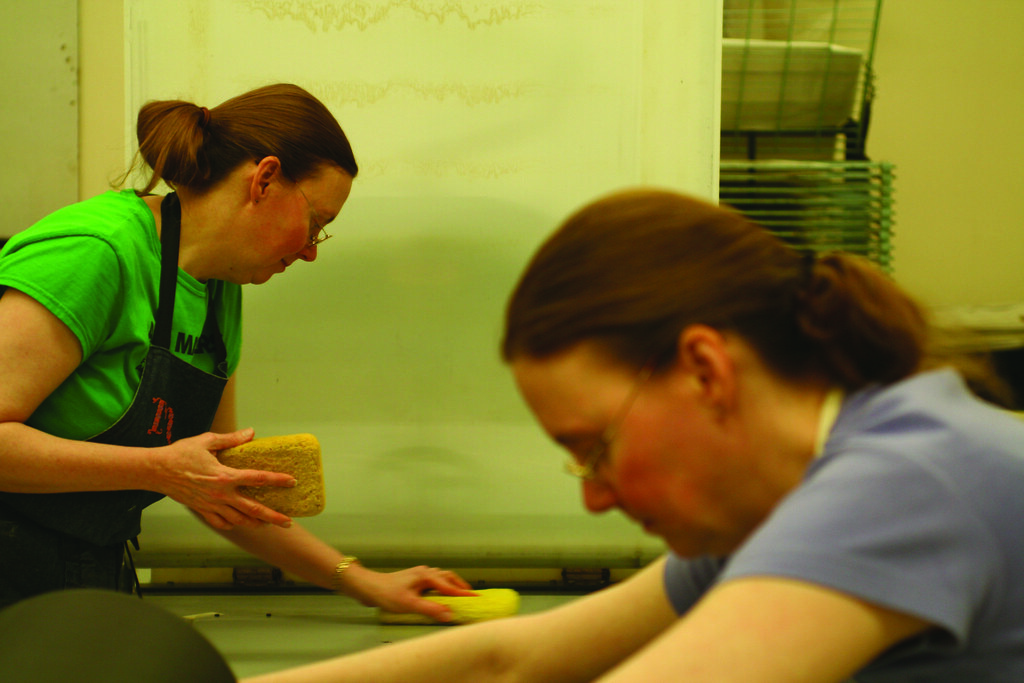 Meda Rives sponging and Veda Rives rolling ink during the editioning of "Mother and Child" lithograph by Harold Boyd, 2006 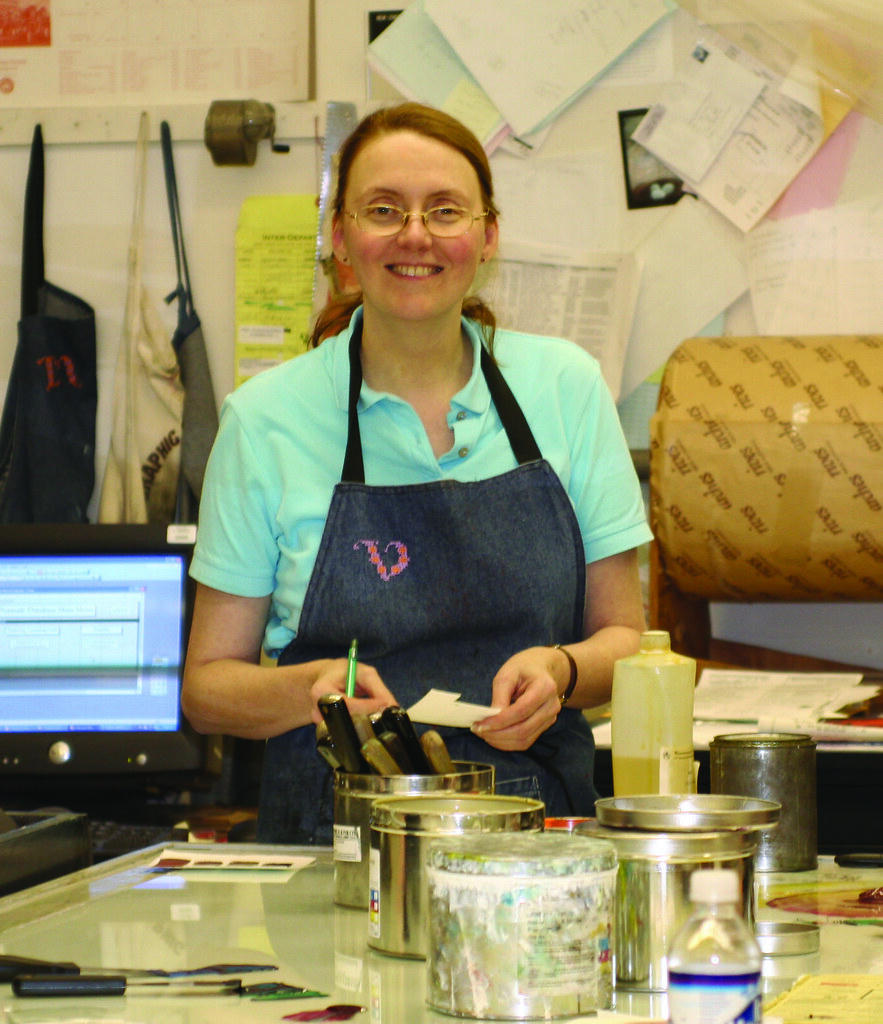 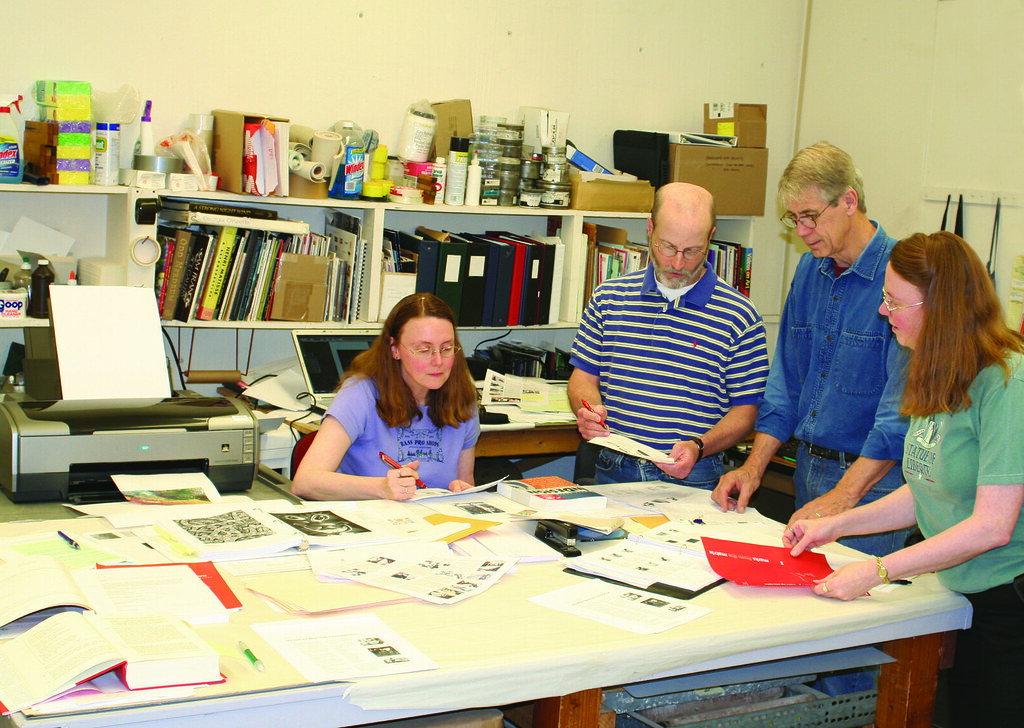 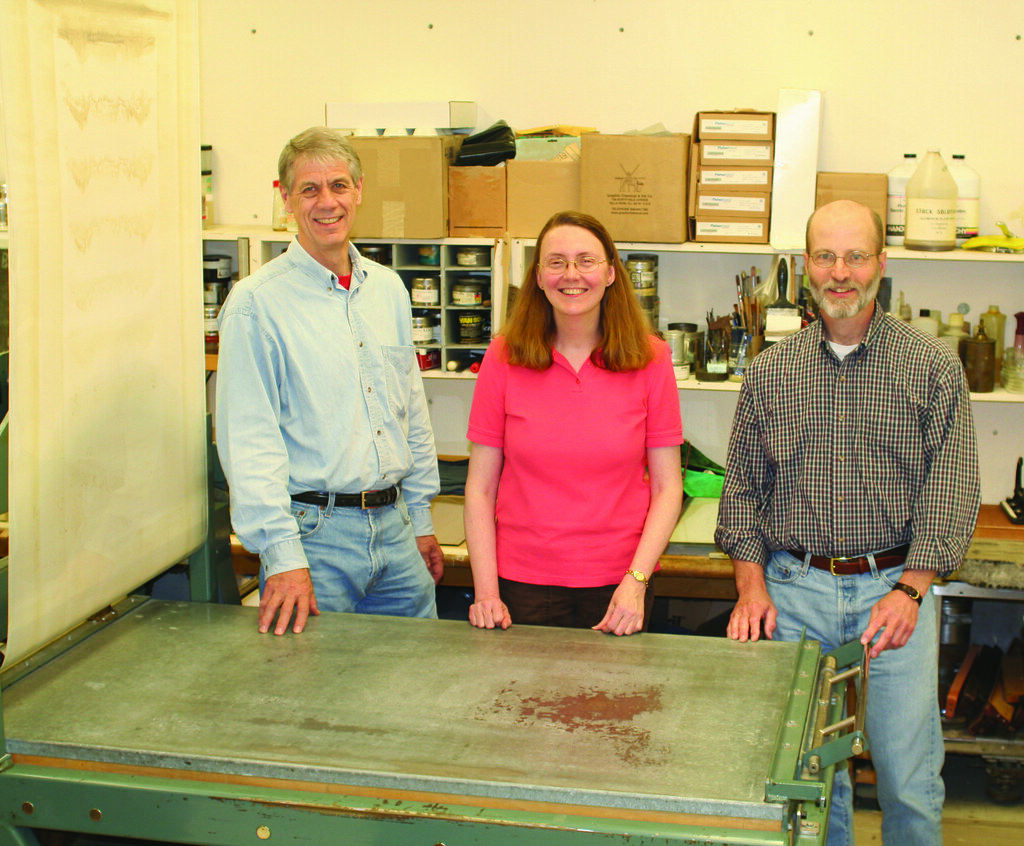 Normal Editions' early days were both exciting and uncertain. Funding was a major hurdle and facilities were modest in size and scope. However, the results of the collaborations with visiting artists in the form of limited edition lithographs and experiences for all involved were rewarding and inspiring. Artists donated impressions from their editions to help support future projects and grant funding was sought to help stabilize the financial side. Students were eager to exchange ideas, skills, and experiences with artists and faculty.

The first director of Normal Editions was Steve Britko, who set a high record of projects, completing 16 in that first academic year. Britko left Normal Editions after just one year to pursue the opportunity to be Studio Manager and Master Printer at Tamarind Institute, University of New Mexico in Albuquerque.

Normal Editions' second director and master printer was Richard D. Finch, serving from 1977 to 2014. Finch had been a student of Butler’s at Southern Illinois University at Edwardsville, which had an excellent print program and contract workshop of its own. Finch truly embraced the educational mission of Normal Editions and worked hard to achieve the vision he shared with Butler of Normal Editions' potential for expanding appreciation for printmaking, collaboration, and creating noteworthy contemporary works of art. Finch initiated traveling exhibitions of works selected from a steadily growing archive to extend the audiences engaging with the publications. Normal Editions thrived under his leadership.

By the middle 1980’s it was obvious that the Workshop would benefit from the addition of another printer. Todd DeVriese, a recent print graduate student, was the first assistant director of Normal Editions from 1988-90. This arrangement enabled the Workshop to expand the scope of collaborative projects and the number of hours students could participate. 1990 was also the year that Veda Rives and Meda Rives joined the Normal Editions team as graduate students. The pair served as dual assistant directors during Finch’s sabbatical in 1993. Veda became assistant director in a continuing position in 1994, later becoming associate director and master printer. From the beginning of Rives’ time at Normal Editions, her goal was a book publication featuring Normal Editions' archive, philosophy, and history.

The 30th anniversary of Normal Editions was recognized and celebrated in the fall of 2007 with the retrospective exhibition and book publication of the same name: Marks from the Matrix: Normal Editions Workshop Collaborative Limited Edition Prints 1976-2006 and a conference entitled Frontiers in Printmaking. The conference featured multiple exhibitions, panel discussions, presentations, demonstrations, a keynote speaker, open portfolio with recruitment fair, exchange portfolio, and open studios in the community.

In 2016, Normal Editions celebrated its 40th anniversary with a series of six exhibitions in the Bloomington and Normal Communities. Currently, Normal Editions is directed by Veda Rives Aukerman, with support from printmaking faculty Morgan Price and Sarah Smelser.