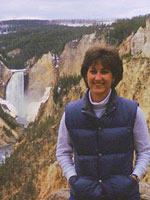 Joni Kinsey is Professor of American Art History in the School of Art and Art History at the University of Iowa where she has taught since 1991. She received her Ph.D. from Washington University in St. Louis and specializes in landscape painting and theory and art of the American West. She is the author of Thomas Moran's West: Chromolithography, High Art, and Popular Taste (University Press of Kansas, 2006); Plain Pictures: Images of the American Prairie (Smithsonian Institution Press, 1996); and Thomas Moran and the Surveying of the American West (Smithsonian, 1992) as well as many articles and chapters of books. Among other courses, she teaches a class at the University of Iowa on nineteenth-century American print culture and is currently working on an exhibition of American Etching Revival prints for the University Of Iowa Museum Of Art.

American Images in Print--Past and Present