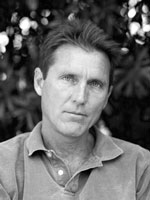 Mark Klett photographs the intersection of cultures, landscapes, and time. His background includes working as a geologist before turning to photography.

Klett has received fellowships from the Guggenheim Foundation, the National Endowment for the Arts, the Buhl Foundation, and the Japan/U.S. Friendship Commission. His Work has been exhibited and collected both nationally and internationally for over 25 years. He is the author of twelve books including the recently released Yosemite in Time (Trinity University Press, 2005, with Rebecca Solnit and Byron Wolfe), Third Views, Second Sights (Museums of New Mexico Press 2004), and After the Ruins (University of California Press). Mark Klett is Regents’ Professor of Art at Arizona State University in Tempe, Arizona.

American Images in Print--Past and Present

Topic: Projects based on 19th Century Photographs of the Amnerican West: The "Third View" and "Yosemite in Time"
(Thursday morning)