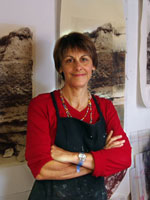 For several years, Robin McCloskey’s work has explored the manipulated landscape. Two Bay Area features, the redwood forest and the Baylands, have figured prominently in this work. As Robin hikes this terrain, she is awestruck to think of its nearly total transformation in little less than 200 years. Despite this reshaping, traces of past inhabitants aren't hard to discern: places with Spanish names abound, and exiting the freeway at Ashby in Berkeley, she passes Shellmound Street, a site for more than 1,000 years of a Native American settlement. Robin tries to imagine previous inhabitants standing where she does, looking at the places that have become familiar to her, fascinated with the idea that the land on which we now live and work harbors secrets from those long gone. Remnants from this past, entombed beneath our feet, mirror the personal memories and secrets buried in the mind and heart.

Robin is currently at work on a series of prints, which explore this idea of landscape and memory. Specifically, the landscapes include both a typical view and its imagined underground aspect. The work begins with the building of a sculpture, composed primarily of soil, to represent the underground portion. Embedded in the dirt and mud are everyday objects, that anyone might have owned and used. Some of these may have personal significance, having once belonged to family members, though they are objects much too ordinary to be considered heirlooms.

The structures are photographed and digitized, combined with the more prosaic landscape photo, and manipulated in Photoshop to create the sense of seeing above ground and below. The computer montage is output as film and exposed on to a plate to create a photo-etching. The photo imagery is augmented with traditional printmaking, drawing or monotype, to add color and a handmade mark. Working in this manner allows Robin to layer the present with the past, and the experimental with the traditional, in terms of both content and technique.