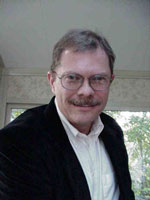 In 1976 Steve Gossard earned a bachelors’ degree from the Art Department at Illinois State University. He received a masters’ degree in Art History in 1982. Since then, Steve has had experience working with exhibits in the gallery at the Center for Visual Arts, and was asked by the Museums Department to curate an exhibit from Milner Library’s circus collection. This began Steve’s interest in circus historical research.

In the course of researching the exhibit he met some of the retired circus professionals that were still living in the city. These were wonderful, fascinating people, and he felt that their accomplishments had been forgotten by the Bloomington community. Steve resolved to try and give them the acknowledgement that they deserved. From 1985 to 1992 he published seven articles in Bandwagon magazine, the journal for the Circus Historical Society of America. In 1991 he self-published the one-and-only comprehensive history of the development of trapeze: A Reckless Era of Aerial Performance, the Evolution of Trapeze. That same year Steve was hired as curator of Circus Collections at Milner Library, and in 1992 he was appointed Official Historian for the Circus Fans of America.

The scope of Steve’s research expanded when he discovered that there was a rich history of circus activity in other parts of Illinois as well. He found a fairly extensive article which had been published in Bloomington’s Daily Pantagraph in 1898. It had named a number of professionals who had been performing at the winter quarters in Petersburg, Illinois. The founder of the Petersburg Winter Circus, Harry Lamkin, had been part owner of the Gardner, Lamkin and Donovan Circus, which had toured Central and South America in the 1880s. Lamkin’s partner, Frank Gardner, had been from Steve’s hometown, Galesburg, Illinois. The more he discovered about the relationships between the professional circus people in different parts of Illinois, the more fascinating these connections became. Steve’s presentation for the Menard County Historical Society will chronicle this fascinating history, and the relationships between these people.