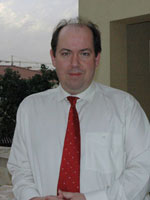 Todd DeVriese is an artist and educator living in Lubbock, Texas. In the last seventeen years, he has had 25 Solo Exhibitions at 27 venues, as well as shown artwork in over 100 invitational exhibitions ranging from two person shows to group shows. These exhibitions have been located in North America as well as other international venues. In addition, his artwork was seen in 42 Juried exhibitions, and is held in 28 private and public collections, including two major commissions: one at the Federal Reserve Bank of Chicago, and one at the School Employees Retirement System of Ohio, in Columbus.

Todd received a Bachelor of Fine Arts degree in 1985 and an Masters of Science degree in 1988 from Illinois State University, and subsequently a Master of Fine Arts degree from The Ohio State University in 1992. In 1996, he joined the faculty in the Department of Art at the Ohio State University. In 2001, he came to work at Zayed University in the United Arab Emirates (the region’s first national university for women) with a mandate to set up and develop a program in the area of fine art and design. During this time, he also served as Interim Dean for the College of Arts and Sciences. Most recently, he has joined Texas Tech University as the Director of the School of Art in 2007.

He has been a print shop coordinator at Pilchuck Glass School from 1992 to 1995. He also served on the Board of Directors of the Ohio Art League as Vice-President from 1995 to 1999. Todd has participated in artists residency programs such as the Anchor Graphics Printmaking Residency in Chicago, Illinois, and the Ohio Arts Council Artists Exchange/Residency with the city of Dresden, Germany. These residency programs were developed for the creation of new artworks in the print medium. His curatorial work has involved five exhibitions in the last ten years, including the 2003 exhibition The Method and The Matrix: Contemporary Printmaking in Ohio, held at the Riffe Gallery, Columbus, OH, and the Weston Art Gallery, Cincinnati, OH.